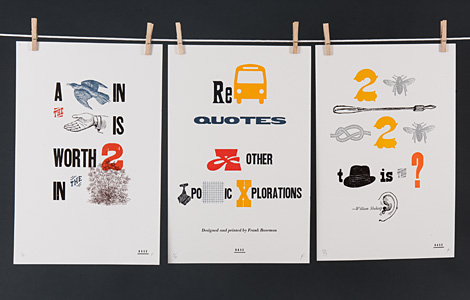 Upon completing my sabbatical work, I was grateful for the opportunity to put that work—as well as many other projects—on display. If you are in the State College area in the Fall (perhaps checking out a Penn State football game), hope that you can stop by to see the exhibition. Huge shout outs to Kelleann Foster, Jamie Lyn Perryman and Scott Tucker of the Stuckeman School of Architecture and Landscape Architecture for their interest and support! Here are the details:
Rebus Quotes and Other Typographic Explorations
Design Work by Frank Baseman
Rouse Gallery, Stuckeman Family Building
The Pennsylvania State University
University Park, PA
September 22–October 27, 2017
Gallery Talk: Friday, September 22, 2017, 4pm
Reception to follow