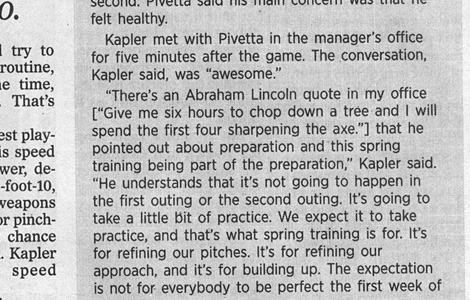 As a lifelong Phillies fan and a lifelong baseball fan (how could you not be with a last name like Baseman?) Growing up the second of four boys (the joke in the family was always that my Mom had given birth to an infield), and playing Little League baseball my older brother did play first base, and I did play second base.

As the aforementioned baseball fan and Phillies fan I closely follow my hometown team, and was pleased—if not thrilled—to read in the Sports section of the March 2 edition of the Philadelphia Inquirer a little passage under the subhead, “Starter struggles” where Gabe Kapler, the recently hired new Phillies manager mentioned an Abraham Lincoln quote that hangs on the wall of his manager’s office: “Give me six hours to chop down a tree and I will spend the first four sharpening the axe.” The article references pitcher Nick Pivetta struggling, or working through some of the things that one would need to work on in Spring training to prepare for the long baseball season ahead. 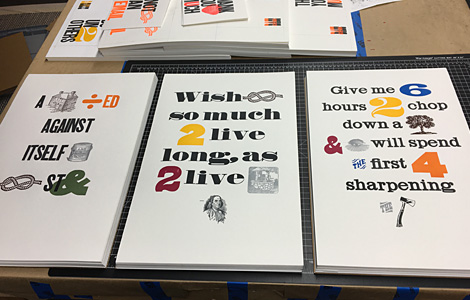 Well, “great minds must think alike”… as I recently produced a print using this same quotation (far right in photo of recent broadsides), and on a whim I decided to send one of these prints to Gabe Kapler. I wrote him a letter in which I explained that for the past almost 1.5 years or so I have been “practicing the letterpress,” meaning I have been working on/using/getting to know how to work with and operate a vintage Vandercook printing press and producing some work with it. Throughout this learning process of working in a new media and working with new (to me) equipment, I have made a ton of mistakes—and learned an awful lot. Unsure whether he would even receive my package—let alone respond—I was more than pleasantly surprised to receive the following text from Gabe Kapler of the Phillies a few days later. 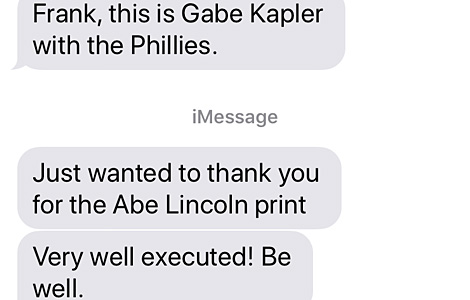 In addition to being an aspiring printer—among many other things—I am also a Professor and Director of the Graphic Design Communication program at Jefferson (Philadelphia University + Thomas Jefferson University). And for many years now as a kind of motivating factor I have used the following baseball analogy when talking with students that are struggling on particular projects: “of course you want to step right up there and hit a home run or a grand slam—doesn’t everyone that steps up to the plate? But very often one has to take the strike outs, and the ground ball outs—the setbacks—that are inevitably going to come along the way.” In other words, a lot of times you just have to work through things. Best of luck/great wishes to the Phils this season. I’m sure that I won’t be the only Phillies fan watching and rooting for my home town team. Play ball!