Oh, the Folks You’ll Meet Along the Way 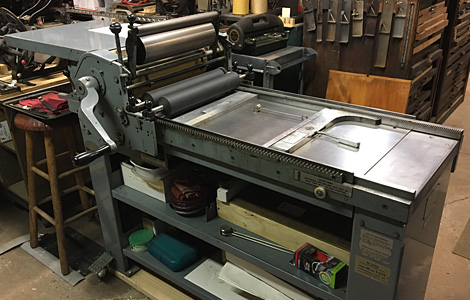 After my foray to Hamilton, I started to work in real earnest on my sabbatical topic. As I began to research/write/plan/design, the project began to take some shape and form, and even started to have somewhat of a title, which came to stick: “Rebus Quotes and Other Typographic Explorations.” At first, to get warmed up, almost like exercises in letterpress printing, I just wanted to print as much as I could and experiment—and try not to be too judgmental about whether what I was making was any good or not. I started to go to Raven Press at University of Delaware at least once a week—many times twice a week—to use their letterpress facility.

Along the way, I continued to contact and meet some folks within the wider letterpress community. I approached Craig Welsh of Go Welsh in Lancaster, and after a bit of a visit Craig was offering to lend me some of his large—but beautifully broken—wood type pieces (thanks Craig!) to experiment with. And I also met a wonderful letterpress maven named Alan Runfeldt of Excelsior Press. Alan is located in Frenchtown, NJ, and he has become a sort of letterpress mentor, full of all sorts of stories and tips and tricks of the trade. I first went to see Alan to visit his shop and look at some of the presses he had.