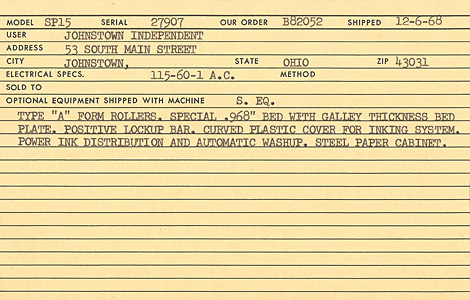 It’s official: “Vanessa the Pressa” (as she is known to us) was “born” er, delivered in December of 1968 to “Johnstown Independent” in Johnstown, Ohio. I’m guessing that this is probably “The Johnstown Independent” as in a newspaper of that day. Thanks to the original owner press card (serial number 27907 as shown) as tracked down and supplied by Fritz Klinke of N.A. Graphics (with the nudging support of Paul Moxon). Good to know the lineage. Who knows what great impressions have been made with this press through the years. It’s all I can do to live up to the standards and keep on pressing on!