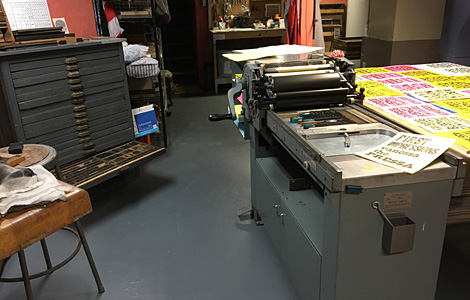 After a rather exhaustive search, “Vanessa the Pressa,” a 1968 era Vandercook SP-15 letterpress arrived by crate and truck and entered my life just in time for the holidays. And she made a long trip too, coming all the way from Toronto, Canada.

It’s too long a story—and a good one—but, suffice it so say that the search was worth it. I met a very sweet guy, Craig Black of Don Black Linecasting, and after many, many emails and phone calls, I found myself renting a van and heading up North to check out this press. I was mostly concerned as to whether or not the press I wanted would be able to fit into our basement, as we do not have a separate studio space, nor a garage. But, we do have bilco doors (I call them “Dorothy doors” from the Wizard of Oz) and after sending photos of the space and in many conversations, I was assured by Craig and many others within the letterpress community that “we’ve fit them in tighter places than this.” I took this at face value, and with a whole lot of pluck and luck, the press fit into our basement—but just by a hair.

One of the things I learned rather quickly at my very brief stint at Hamilton was how to properly proof type. So, modeling after that, the very first thing I did with my new letterpress was to proof some of the wood type that I had purchased along with the press from Craig  Black. And to my utter surprise and delight, several of the typefaces I have now in my collection had originated “back in the day” at Hamilton! I was told that very often wood type manufacturers would put a seal/a stamp/a sign somewhere on the type, usually on the capital letter “A.”